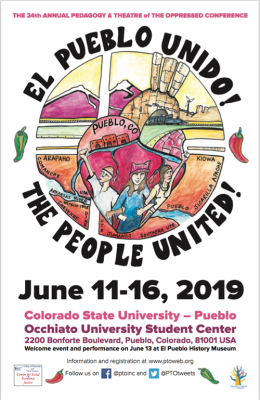 Nadia attended the 24th Pedagogy and Theater of the Oppressed Conference in Pueblo Colorado (PTO).
The PTO supports people whose work challenges oppressive systems by promoting critical thinking and social justice through liberatory theatre and popular education. Their vision is to create global access to popular education pedagogy and liberatory theatre of the oppressed methods to support a world based on radical love and social justice instead of oppression and violence.
Nadia was also part of Julian Boal’s pre-conference three-day workshop, “Forum Theatre: Examining Oppressive Systems, Exploring Concrete Options,” and she participated in the conference’s opening Forum Theater performance, which featured scenes created during the workshop. 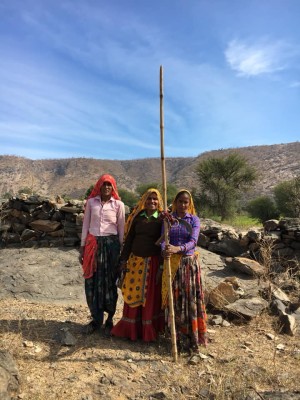 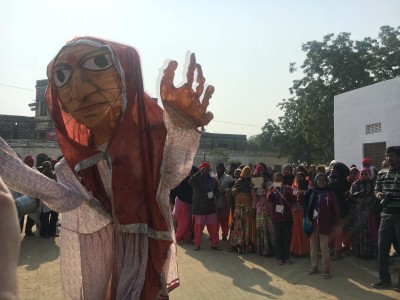 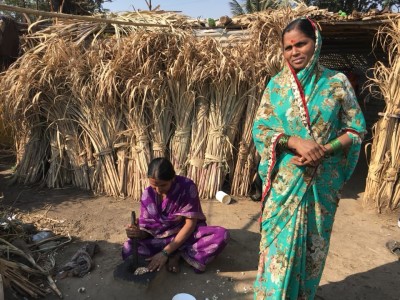 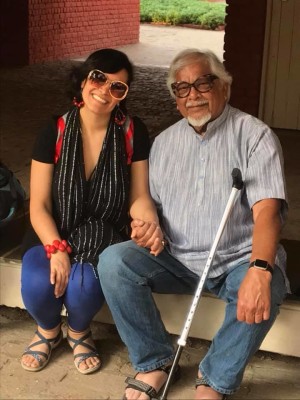 Nadia, along with three more Rollins College Faculty and Staff representatives, was one of the presenters at the American Association of Colleges and Universities Conference in Seattle. The presentation focused on the infusion of community engagement (CE) courses in general education. The team talked about each one of their CE courses at Rollins and the support from the Community Engagement Office.

Nadia spoke about the creation and methodology of her “Community Arts and Activism” class. A course that actively explores the use of performing and visual arts in activism and social change, in which students develop and execute a Community Arts project with a local community organization.

Nadia would like to thank Rollins College and her colleagues for their support and amazing work! 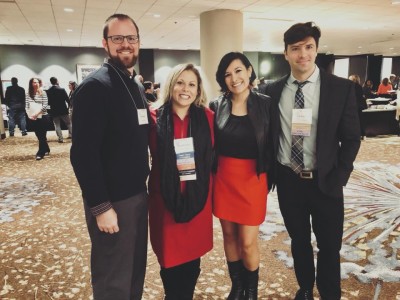 Nadia believes it is extremely important to open spaces to engage in conversations about global education and community engagement; she also thinks the conversation needs to be centered in ethical and anti-colonial practices. “It seems that there is a strong interest in implementing ethical practices, but we cannot implement them if we don’t address the root causes of unethical practices (with oppression and privilege at the core), which are also connected to political turmoil and social inequality locally and abroad. We have a responsibility to address these issues; we owe it to our students, and most importantly, to the communities we work with, to our own communities, to our world.”

Nadia wrote and directed “Una Borinqueña en Florida,” a puppet show geared towards Puerto Rican children who left the island and moved to the mainland after the 2017 hurricanes.

The show is performed in Spanish and includes a Q&A session, which allows children to ask questions, share their own stories, practice empathy, and connect with others so that they may understand that they are not alone; the show also teaches tactics for dealing with stress, anger, and sadness. 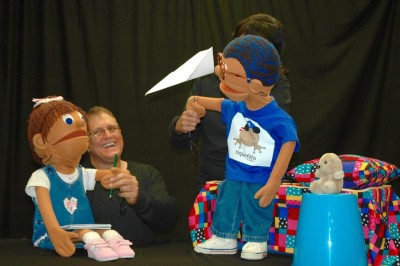 The show is part of MicheLee Puppets’ “Puppets Helping Kids in Crisis” initiative, designed to help kids from Puerto Rico and Latin American countries heal from their trauma and adjust to life in the United States.

Nadia was awarded Valencia College’s Chelsey G. Magruder Foundation & First Union National Bank of Florida 2018 Humanities Fellowship. The fellowship funded travel to Japan to facilitate research on the influence of traditional Japanese art on modern and contemporary Japanese art, as well as research on the impact of the atomic bombs in Japan today. 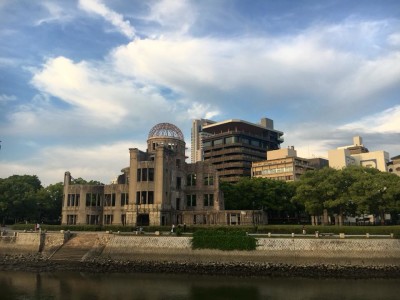 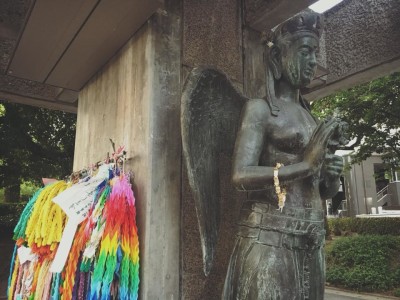 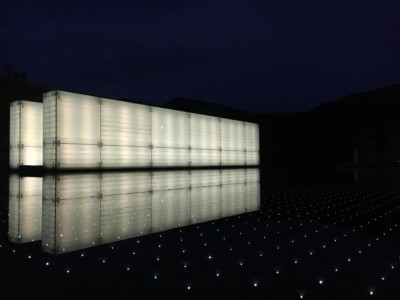 Nadia hopes that her research on the atomic bombs’ history, sites, and impact, will allow students to better understand the influence of the bombs on Japanese culture and arts, and understand that the impact still lingers today, giving students the opportunity to connect with the issue not only critically, but also empathically. 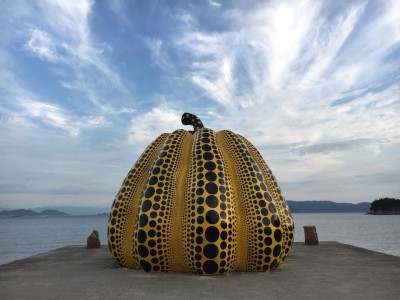 She is grateful and excited to have had such amazing opportunity. She wants to thank Valencia College’s Humanities Department for all their trust and support! 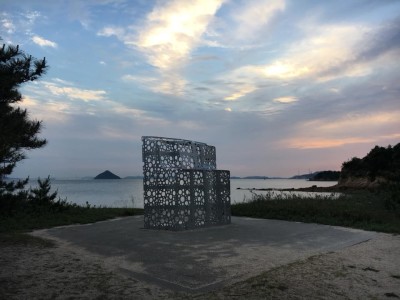 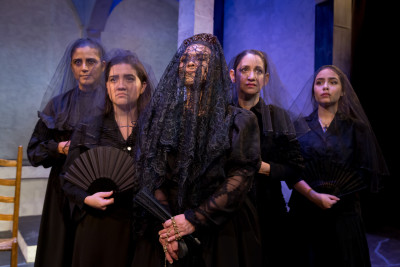 Nadia is humbled by her return to SSC’s stage as a director and she considers this a wonderful opportunity to support and showcase Latin American Talent. 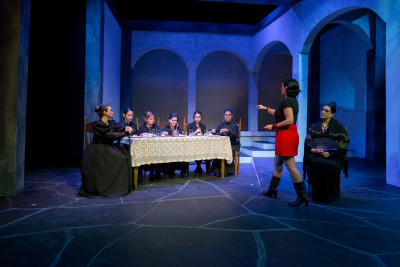 “It is an honor for me to direct this production and especially to have the opportunity to also perform it in its original language, Spanish. I am thrilled to be part of the first ever Spanish speaking play produced at the Seminole State College. In my work, I am very interested in decolonization through theater, meaning recognizing the values, realities, experiences, truths, and voices that have been silenced by cultural hegemony. While The House of Bernarda Alba is a European play, doing theater in Spanish in the context of the United States is, in my opinion, an act of decolonization; and in the case of this production, decolonization is also having a group of actresses (yes, all women) proudly showcasing their different Latin American dialects in Spanish and their Latino accent in English. Through our work, we are providing a space to recognize the Latin American experiences and contributions, which often times are erased, denied, and devalued.” 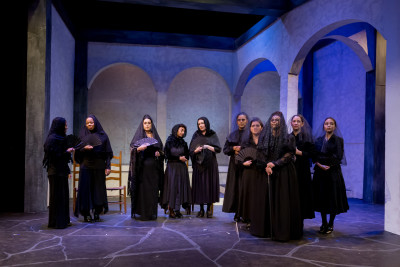 The play was very well received by both the English speaking and the Spanish speaking audiences and received wide press coverage.

Click below to see reviews and press links, including an interview with WMFE’s Spotlight.

WMFE Spotlight (Make sure to play the audio!) 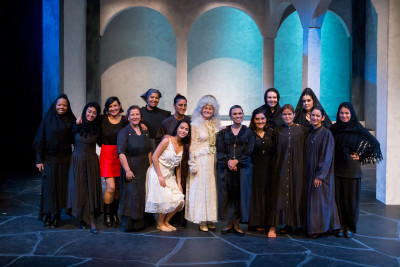 Nadia is thrilled and thankful to share this experience with such wonderful group of women!

Nadia designed and facilitated an intensive two-day Theater of the Oppressed workshop for activists and organizations. Process included a 36 page written manual for reproduction of the work. Manual and workshop was commissioned by the Joan Preiss Memorial (2017-2018) under the National Farm Worker Ministry. 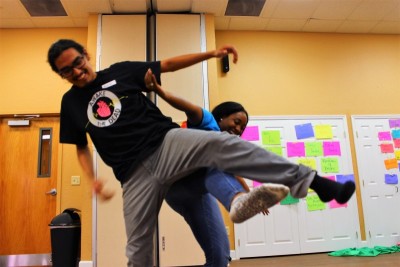 The workshop took place at the Hope Community Center, and it was part of an effort from YAYA to find creative ways to support the efforts of farmworkers in their fight for justice! 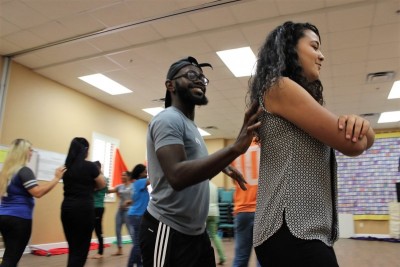 “With Nadia’s spiritual spin, the ‘spect-actors’ were able to receive, not only their hopeful outcomes from the workshop but much more.” Transformation. Understanding. Trust. Peace.

“[We] left the community center not only with a seemingly ethereal connection with all people we participated with, but a better understanding of ourselves and a new way to process and possibly begin to heal from the wounds inflicted by many of the oppressions we face. We also left equipped with the know-how necessary to disseminate the healing skills we’ve learned to communities that may not have access to them.” (Full review) 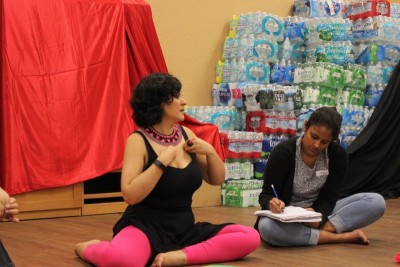 Nadia is grateful for this opportunity and would like to thank all participants for making this such an unforgettable experience!

Nadia has joined Rollins College as an Adjunct Professor and will be teaching rFLA classes under the Theater Department. She will also teach as a guest under HOLT’s Humanities Department. Her classes will focus on Theater for Social Change, Latin American Theater, and Community Arts. She is very excited and humbled by this opportunity.

Nadia has accepted a position as Adjunct Professor at Valencia College. She will start in the fall and will be teaching under the Humanities Department, East Campus. Her classes will include 20th Century Humanities, Latin American Humanities, and Greek and Roman Humanities. She is excited and humbled by this opportunity.
Faculty FrontDoor Valencia College 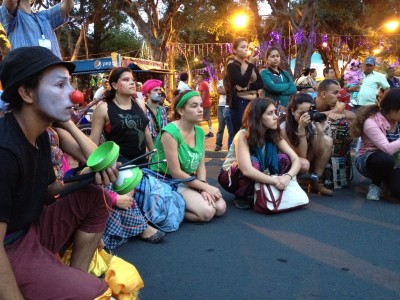 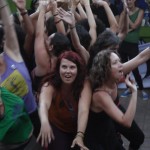