“The 39 Steps” is playing as part of the Orlando International Theater Festival. This play is a long-form improvised spy thriller based on the classic John Buchan novel. 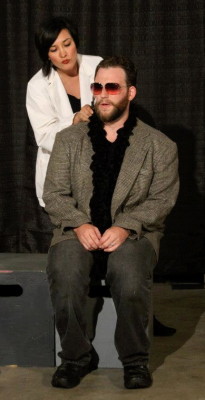 Using their cellphones and watching the results in real time on a projection screen, the audience votes for the hero of the story. Any of the actors could be the main character: Hannay. The rest of the cast draws cards to decide who will play the spy, the villain, and the wild card. The audience’s suggestions hang in the background inside envelopes marked as “confidential” and are used throughout the play. Driven by the audience’s suggestions, the conspiracy changes every night. In this story, Richard or Rachael Hannay, who appears ordinary, is drawn against his/her best judgment into a mystery. The police and the establishment are working against Hannay; only his razor wit and clues from a dead spy will get him/her through this.